← more from
Polyvinyl Records
Get fresh music recommendations delivered to your inbox every Friday.

Talent Night at the Ashram

by Sonny & The Sunsets 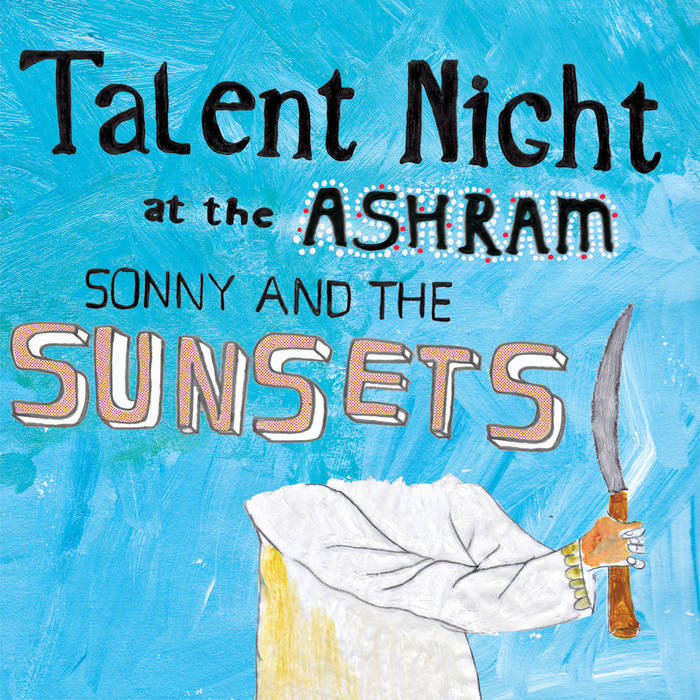 dharkoshan A love letter to your ears. Favorite track: Talent Night at the Ashram.

Sam Foote You should recommend this album to that girl that you like! If she doesn't like it, maybe it would never really work long term anyways. Favorite track: Blot Out the Sun.

Bizarre? Scrappy? Deranged? Sonny & the Sunsets’ latest record sees them in perhaps their strangest and most lyrically explorative phase yet.

A big soup of sonic ideas that wouldn’t normally be glued together, the songs on Talent Night at the Ashram make a large collage that mixes cinematic stories of fringe characters.

Initially envisioned as a film project, each song was originally a short film that, when strung together, formed a feature-length movie.

As Sonny Smith was writing the scripts and hiring the actors (even shooting a few of the clips), the scripts began to morph into songs.

Equal parts Fellini and Os Mutantes, Talent Night at the Ashram is cinematic in its storytelling and kaleidoscopic in its mixing and merging of musical genres.

On album opener “The Application,” Smith applies to be a human being to the tune of Beach Boys harmonies, ragtag beats and ‘80s synths.

“Happy Carrot Health Food Store” tells an epic saga of grocery store employees set to a soundtrack that takes listeners on a psychedelic odyssey with elements of jazz and a hallucinogenic sequence including a conversation with a girlfriend swimming in his beer glass, or is that a dog?

‘60s folk, electric sitars, flutes, and myriad other sounds help accentuate tales of professional bowlers in desperate need of a strike (“Icelene’s Loss”), a mansion that houses every woman Smith has ever known (“The Secluded Estate”), and Occupy meetings ending in bad love (“Secret Plot to Destroy the Underground”).

Pairing uniquely off-the-wall stories with an ambitious musical scope, Talent Night at the Ashram finds Smith once again securing his status as one of today’s most arrestingly inventive songwriters.

Sonny & the Sunsets are a beautiful west coast thing. Birthed from the sand, the surf, and twilight campfires down in Ocean Beach, Sonny & the Sunsets’ busted beach-pop songs spark recollections of doo wop's otherworldly despair, a dose of goofball humor from the Michael Hurley school, and positive possibilities exuded by Jonathan Richman. ... more

Bandcamp Daily  your guide to the world of Bandcamp

Little Brother joins the show to discuss their beautiful journey, plus tunes from Fat Tony